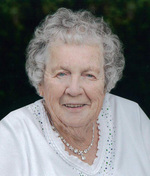 It is with profound sadness that the family of O’Rena Keeble announces her passing on November 6, 2020 at the Colchester East Hants Health Centre, Truro after a brief illness at the age of 100.

She was predeceased by her husband, Arthur Keeble; sister, Marjorie West, brother, Waldo Hutchinson and son-in-law, Murray Forbes. Mom loved cooking family dinners and a good game of cards. She was an avid fan of the Toronto Blue Jays and the Maple Leafs. In keeping with her wishes, cremation has taken place and there will be no visitation.

A private family graveside service will be held at a later date. Arrangements have been entrusted to Colchester Community Funeral Home, 512 Willow St., Truro. Online condolences may made by visiting www.ColchesterCommunity.com