In Memory of
Glen Roy
Thompson
Click above to light a memorial candle.
Memorial Candle Tribute From
Frontrunner Professional
"The lighting of a Memorial Candle allows visitors to leave a symbolic gesture of"
View full message >>>
Send Flowers
Menu 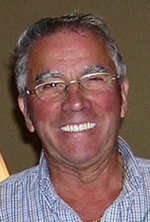 Slightly built but wiry and very tough, Glen lived life to the full, with enormous energy and enthusiasm. If you asked him how he was doing and could get him to slow down long enough to answer, he would invariably say “Ball of fire!” He was a very hard worker, tremendously determined and persistent when he set a goal for himself. Always ready to laugh and loving a good time, he was also decent and kind and honourable, as his many friends can attest, quick to lend a hand and very good at figuring out solutions to practical problems – whether his own or those of others.

Glen was curious about everything, full of fascinating and funny stories about events and experiences of his life and the many people he had known and met. A risk-taker, he had more than one brush with death: no one was more surprised than he to see him make it to 85! And he found plenty of ways to add to his speed. Starting with stock car racing in the 50s, Glen was snowmobiling from the time the machines were first made available and was an avid motorcyclist. He also fulfilled his childhood dream of flying and was a pilot for decades, owning a number of different aircraft. He served as President of the Truro Flying Club and was a pilot for CASARA Nova Scotia (search and rescue). He enjoyed travel and fishing, making yearly trips to the rugged North.

Glen was especially close to Helen, his wife of 63 years, whom he met when they were both teenagers and he was apprenticing as an auto mechanic at Goodspeed’s in Truro. He went on to open his own garage in 1966, Auto-Trans Garage in Bible Hill, and was a constant presence in the community until his retirement in 1994. Helen passed away in 2017, and Glen has missed her dreadfully. Struggling with a variety of medical problems in his last months, forced to slow down, he was still often heard to say that he wouldn’t change one day of his life for anything.

Glen was a longtime member of the Truro Legion. He was a devoted Mason, attaining the rank of Master Mason and the 32nd degree in Scottish Rite, and a proud member of Fellowship Lodge 112 and the Central Shrine Club. A Masonic Memorial Service will be held for Glen in 2021.

Loving husband, faithful brother, loyal friend, caring, all-conquering Dad and Pa to the younger generations, Glen will be deeply missed. But he and Mom are once again inseparable, and we will cherish their memory forever.

You can honour your own memory of Glen by making a donation to the Shriners Hospital for Children in Montreal at https://www.shrinershospitalsforchildren.org/montreal/ways-to-give.


A Masonic funeral service will be held at the Colchester Community Funeral Home in Truro on Saturday, May 28th at 11am. All Welcome. Interment for Glen and his wife Helen (nee Dryden) will take place in the Robie Street Cemetery in Truro on the same day at 2pm. All family members are invited.


Arrangements are under the direction of Colchester Community Funeral Home, 512 Willow St., Truro, where online condolences may be sent to the family by visiting: www.ColchesterCommunity.com