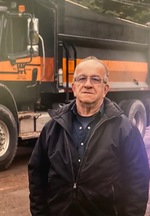 It is with great sadness that we announce the passing of our beloved husband, father, and brother on Friday, December 18th, 2020 at his home in Truro. Born on June 7th, 1944 in Tatamagouche, Nova Scotia, he was the son of the late Harold and Beulah Tattrie. Dick was a devoted husband, father, and grandfather. He enjoyed playing bingo with his bingo buddies, Bruce and Gail, and was always up for a good game of crib. Dick spent most of his career at Will-Kare Paving, dedicating over 40 years of service to a job he loved. He considered his employer and co-workers his extended family. After retiring in November 2019, he always enjoyed visiting the boys at the shop.

The family would like to thank Dr. Rowe, Dr. Cortney Smith, and Lisa Weatherbee of the Palliative Care team, and VON for their kindness, compassion, and care they provided. A celebration of life will take place at a later date due to COVID – 19 restrictions. Interment in Robie Street Cemetery, Truro. If so desired, donations in Dick’s memory can be made to the SPCA, Palliative Care, or VON. Cremation has taken place under the care and direction of Colchester Community Funeral Home, Truro, where online condolences may be sent to the family by visiting: www.ColchesterCommunity.com