In Memory of
Linda Ann
McCurdy (McCully)
1939 - 2020
Click above to light a memorial candle.
Memorial Candle Tribute From
Colchester Community Funeral Home
"We are honored to provide this Book of Memories to the family."
View full message >>>
Send Flowers
Plant a Tree In Memory of Your Loved One
Click Here
Menu 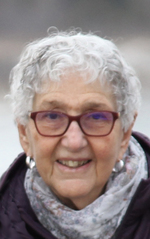 McCurdy, Linda Ann – Age 81, Central Onslow, passed away on December 21, 2020 at home. Born in Debert, she was a daughter of Sidney McCully and Lillian (Geldart). Upon graduating from Acadia University in 1961, Linda married Earl Lindsay McCurdy of Middle Musquodoboit.

Soon after, Linda and Earl were posted to Zweibrücken, West Germany where their first two sons, Dan and Barry, were born. Their third son, Chris, followed soon after when Earl and Linda were posted back to Chicoutimi, QC. As with many military families of the time, the next twenty years were spent moving around Eastern Canada. Linda had her hands full as she raised three boys when Earl was away on lengthy exercises. In many ways, she was the glue that held our family together. Nova Scotia was always home. Her happiest days were spent with Earl, family and dogs at the family cottage on Isaac’s Lake. Mom always kept busy with her knitting, quilting, card play, curling and golfing. Mom was a special person in many lives and she will leave a hole in the hearts of her sons, daughters-in-law, grandchildren, Stacey, extended family, friends and neighbours.

Arrangements have been entrusted to Colchester Community Funeral Home, 512 Willow Street, Truro. Due to COVID-19 restrictions, a private family service will take place on Tuesday, December 29th in Colchester Community Funeral Home with the Rev. Glenn MacLean officiating. The family welcome you to join them for the service via webcast beginning at 1:55pm (Atlantic Time) on the above date. Interment will follow the service in Debert Cemetery (Plains Road).

Donations in Linda’s memory may be made to the VON or the Canadian Cancer Society. Messages of condolence may be sent to the family by visiting: www.ColchesterCommunity.com