In Memory of
Karl Dow
MacKenzie
1923 - 2020
Click above to light a memorial candle.
Memorial Candle Tribute From
Colchester Community Funeral Home
"We are honored to provide this Book of Memories to the family."
View full message >>>
Send Flowers
Plant a Tree In Memory of Your Loved One
Click Here
Menu 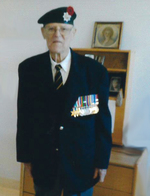 Dad served 32 years with the Canadian Army - his second family. Serving in theatres of war in Europe, Korea and Cyprus with The North Nova Scotia Highlanders, The Princess Louise Fusiliers, The Princess Louise Dragoon Guards, The Cameron Highlanders of Ottawa and the First Battalion Royal Canadian Regiment. In 1972, he retired to his hometown of Truro. After losing his beloved wife, Ethel “Fluff”, “Bun,” his world wasn't the same. At the great age of 97 years, he was ready to take his crib board and go have a game with Mum which he would lose with much grumbling.

He leaves behind a hole in our world. The family sincerely thanks all the staff of the Northumberland Veterans Unit, Pictou for the excellent care they gave Dad, keeping him physically and mentally active during his two year stay there. They go above and beyond in caring for their clients.

No visitation or service by request. Arrangements have been entrusted to Colchester Community Funeral Home, 512 Willow St., Truro. Online condolences may be sent to the family by visiting www.ColchesterCommunity.com