In Memory of
Bonnie Heather
Schooten (Crowe)
Click above to light a memorial candle.
Memorial Candle Tribute From
Colchester Community Funeral Home
"We are honored to provide this Book of Memories to the family."
View full message >>>
Send Flowers
Menu 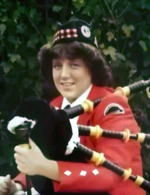 The family of Bonnie Heather Crowe-Schooten regrets to announce her passing on April 18th, 2021 at the age of 63 years in the Colchester East Hants Health Centre, Truro.

Bonnie was born on November 3rd, 1957 to the late Robert Allen Crowe and Catherine Isabella Crowe (Gillis) in the Colchester Regional Hospital, Truro. Bonnie grew up in Upper Onslow and received her education in Truro and the surrounding area. From an early age, Bonnie learned to play the bagpipes and piped for the Truro Girls Pipe Band, as well as for Colchester Legion Pipes and Drums and the Dartmouth & District Pipe Band. She often talked about how proud she was to lead in the dignitaries and perform at the first annual Royal Nova Scotia International Tattoo.

Bonnie attended NRE, CCJHS and CEC and after graduation, interned in the Colchester Regional Hospital to become an ECG Technician. She continued to work there before moving on to work in the Camp Hill Veteran's Hospital in Halifax. It was at an annual Spring Dance held by Camp Hill that she met her future husband, André. They were married in the First United Church in Truro on October 8th, 1983.

After taking some time off to establish a family, she continued her education and attended the Nova Scotia Agricultural College and Dalhousie University, graduating with a Bachelor of Science in Biology. After graduation, Bonnie worked in the Nova Institution for Women, working in Maintenance and as a Training and Coaching Professional.

Bonnie volunteered in her community and was a Unit Guider for Girl Guides and also volunteered in several provincial campaigns and at the polls. Bonnie was also known for her love of nature and animals spending much of her time gardening. Everyone who knew Bonnie knew of her love of Cocker Spaniels and anything involving penguins. In her spare time, she loved to knit and crochet and had a passion for studying history and genealogy, loved golf and watching other sports and she was a fan of the Boston Bruins.

She is survived by her husband, André Schooten; three children, Mark Schooten (Michelle), Adam Schooten (Elizabeth) and Erin Schooten and two grandchildren, Nolan and Zoey, whom she loved very much. Bonnie is also survived by many cousins, one being Colleen Boucher whom she considered a sister, as well as Colleen's husband, David and daughter, Emily. We would also like to mention Linda and Joan Walker and the rest of the Walker Clan, whom she considered as family. Finally, we would like to extend our appreciation to the VON, staff in the Colchester East Hants Health Centre and also to 'Her Girls' at Wynn Park Estates for their help in taking care of Bonnie through difficult times.

Bonnie's family would like to invite friends and family to come together to celebrate her life on July 13, 2022 from 12:30 - 3p.m. in the North River Fire Hall. It is requested that masks be worn. In lieu of flowers, donations in Bonnie's memory may be made to the North River Fire Brigade, the Canadian Lung Association or charity of choice. Arrangements have been entrusted to Colchester Community Funeral Home, 512 Willow St., Truro, NS. Online condolences may be sent to the family by visiting www.ColchesterCommunity.com