In Memory of
Mary Elinor
McCallum
Click above to light a memorial candle.
Memorial Candle Tribute From
Frontrunner Professional
"The lighting of a Memorial Candle allows visitors to leave a symbolic gesture of"
View full message >>>
Send Flowers
Menu 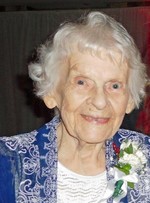 Family was very important to Mary; in addition to her children and grandchildren, she maintained contact with her brothers and sister and was always interested in news about their families. A long-time interest in genealogy was expanded when she got her first computer and started doing online research. She was also able to keep in touch with her wide-spread family through email and Skype.

Friends also played a big part in Mary’s life . . . friends from her childhood and friends she met later in life all had a special place in her heart. One friend who has been a support to Mary and her family in these last few years is Judy Archibald, best friend to her late daughter-in-law, Carol.

Always wanting to try something new, Mary took a woodworking course and made herself a china cabinet; she took an upholstery course, cutting down a sofa to make a love seat. Mary loved to sew and was often the one family and friends turned to when they wanted a special occasion dress.

A long-time member of the Women’s Institute of Nova Scotia, Mary belonged to WI groups in Bible Hill, North River and Riversdale, where she was instrumental in starting the WI group. After her children were all in their teens, Mary worked at the Nova Scotia Youth Training School in Bible Hill, a job she thoroughly enjoyed.

After Laurence’s passing in 1991, Mary lived on her own until June 2018 when a stroke resulted in her move to enhanced care.

Mothers hold their children’s hands for a while . . . their hearts forever.