In Memory of
Logan Ronald Lawrence
Paul
1988 - 2022
Click above to light a memorial candle.
Memorial Candle Tribute From
Frontrunner Professional
"The lighting of a Memorial Candle allows visitors to leave a symbolic gesture of"
View full message >>>
Send Flowers
Menu 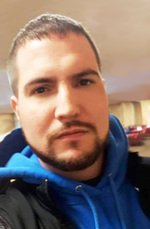 Logan was born in Truro on October 21, 1988. He was currently working in landscaping with his right hand man, Robert Sylliboy. He was a Jack-of-all-trades.

In his early years, Logan began travelling with his grandmother and the Millbrook community members on pilgrimages to Sainte-Anne-de-Beaupré in Quebec. He enjoyed being the senior’s helper on each trip – a true Warrior for his Native community. He would help anyone at any time and will be missed by all who knew and loved him.

Logan was also a member of Boxing Nova Scotia and had several trainers during his involvement in boxing. He received numerous awards and trophies. He and his brother, Chance made Mi’kmaq history at the North American Indigenous Games in Winnipeg in 2002 when they both brought Gold Medals home to Millbrook. Logan not only boxed, but coached as well. He instilled so much ambition, pride and strength in all the young boxers he helped train. He was a true motivator for the youth in the area.
He loved being outdoors exploring nature. He especially enjoyed bonfires where he would tell and hear stories of back in the days of his grandparents.

Donations in Logan’s memory may be made to CMHA – Colchester East Hants or IWK Kids Rehabilitation Services – ADHD.

A visitation will begin on Friday, June 17th at 5pm in the Seniors’ Centre in Millbrook. A Funeral Mass will take place on Monday, June 20th at 11am in the Sacred Heart Church, Millbrook with Father Dariusz Miskowicz officiating. Arrangements have been entrusted to Colchester Community Funeral Home, 512 Willow St., Truro, NS. Online condolences may be sent to the family by visiting www.ColchesterCommunity.com