In Memory of
John Falconer
MacDonald
1929 - 2022
Click above to light a memorial candle.
Memorial Candle Tribute From
Frontrunner Professional
"The lighting of a Memorial Candle allows visitors to leave a symbolic gesture of"
View full message >>>
Send Flowers
Menu 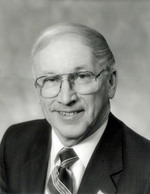 Besides his parents, he was predeceased by his wife, Audrey Mae (Connell); sister, Lillian MacKenzie, Alberta and brother, Fraser, British Columbia.

Jack spent his whole working career in the heavy equipment industry, first with R.A. Douglas then with Wilson Equipment, followed by Atmus Equipment during which he made many lifelong friends. Following his “retirement,” he started his own company selling and installing outdoor furnaces and Boulder Buster Equipment.

After his second “retirement,” he continued to make regular trips to the dockyards in Halifax with his friend, Bryan to scout out new loads or with Bruce to drive the “get away car” on a repossession.

He rarely missed a Ritchie Brothers auction attending his last one just a short time before he passed.

He was an avid hockey fan. In his younger years playing for the Pictou County Pontiacs as well as the Trenton Scotias and when Wayne and Darryl started playing, he became the coach of many amateur Bearcat hockey teams, travelling around the Maritimes and into the United States with them. He was inducted into the Pictou County Sports Hall of Fame in 1991.

Jack loved nothing more than a party with friends, especially at the camp in Dalhousie Mountain where he hosted his last lobster boil just weeks before he died, but most of all, he loved his family. He made sure all of them had decks, sheds, garages and barns, that he either built himself or supervised the build, much to Wayne’s grief, it was always done his way.

One of his proudest moments was seeing Gracie graduate this past June and he was very proud of Lily for starting her own dog-sitting business.

He will be missed.

Arrangements have been entrusted to Colchester Community Funeral Home, 512 Willow St., Truro, NS. A Funeral service will be held on Friday, August 26th at 2pm in the First United Church, 711 Prince St., Truro, NS, with interment to follow in Watson Cemetery. Online condolences may be sent to the family by visiting www.ColchesterCommunity.com