In Memory of
Clyde A.
Weldin
1936 - 2022
Click above to light a memorial candle.
Memorial Candle Tribute From
Frontrunner Professional
"The lighting of a Memorial Candle allows visitors to leave a symbolic gesture of"
View full message >>>
Send Flowers
Menu

Obituary for Clyde A. Weldin 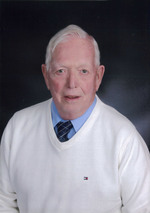 Weldin, Clyde Athol – Age 86, of Truro passed away peacefully on Wednesday, August 24, 2022. He was at home surrounded by his family and good friend, Grant Langford. Clyde was born on March 9, 1936, in New Glasgow, NS. He was the youngest son of the late Edward M. and Alice (Thompson) Weldin. He was the last surviving member of his immediate family.

Clyde began his career in radio working at Radio Station CKEC in New Glasgow, before moving to Truro to work at CKCL in 1955. His career in the printing industry began with Truro Printing and Publishing in 1956. This career ended when he retired from Atlantic Systematic Envelopes in 1996. He loved managing the office for Doug and Bev MacDonald, who were extremely kind to him and his family for many years.

During his life, Clyde was involved in many community organizations and activities. In the late 1950’s, he became involved with the Nova Scotia Provincial Exhibition. From 1967 to 1975, he was manager and secretary of the NSPE Commission. During that time, he was elected president of the Exhibition Association of NS.

Dad was active in the Kinsmen Club of Truro during the 1960’s. In the 1970’s, he was heavily involved with the Truro Schools Band Auxiliary, and served as its president. He was also president of the Douglas Street Home and School Association. During the early 1970’s, Dad served on the executive of the Truro Junior Bearcats Hockey organization. He also coached Victoria Park Little League Baseball and, in the Truro and Area Minor Hockey Association, culminating with a NS Championship.

Clyde was a long-time member of First United Church. He was elected as an elder in 1970, and eventually was treasurer of the Music Committee, Chair of the Worship Committee, Chair of Session, and Chair of the Reserve Fund. He was also instrumental in helping twist Doris McKinley’s arm enough to start a Men’s Choir at First United. He joined the Rotary Club in 1976. He served as club president, worked on many club projects, and helped organize and run the annual Rotary Auction with his friends, Grant, Ken, Jim, and Lloyd. He was awarded a Paul Harris Fellowship in 1998. In 2005, Clyde was thrilled to become an Honorary Member. In 2009, he received the Four Avenues of Service Award from Lieutenant Governor Mayann Francis. This is now considered to be the highest honour a Rotarian can receive.

Dad loved everything to do with golf! He joined the Truro Golf Club in 1955. He eventually became involved with Junior Golf and, in 1977, he became Director of Junior Golf in Nova Scotia. He captained five NS Junior Golf Teams at Canadian National Competitions, and one amateur team. In 2007, he once again became Director of Junior Golf for the province. He was elected president of the NSGA in 1983. In 1979, Clyde and Tom Stanfield started the Stanfield Pro-Junior Competition to help junior golfers and allow them the experience of playing with club professionals. This event lasted for 25 years under Stanfield’s sponsorship and is still held today under the flag of the Atlantic Professional Golfers Association. During his time on the NSGA, Clyde held positions on the first slope rating committee, scheduled tournaments, and worked as a rules official. In 1997, he was host chairman for the RCGA Senior and Super Senior Canadian Championships held in Truro and New Glasgow. In 2003, he chaired another Canadian Seniors Golf event and Seniors Match Play held in Truro. In 1980, he was named Golfer of the Year by the NSGA. In 2003, Clyde was named the male volunteer of the year by Golf News and the Steele Automotive Group. In 2016, he was made an honorary member of the Truro Golf Club. Dad thoroughly enjoyed playing golf, working as a rules official, coaching and traveling with the juniors, and teasing “his girls” in the kitchen (Mandy and Sonya).

Dad will be dearly missed by his family and friends. In lieu of flowers, Dad would like you to consider a gift to First United Church or the Rotary Club of Truro.

A Visitation will take place on Saturday, September 3rd at 1 pm until time of service at 2pm, both in First United Church, 711 Prince St., Truro, Rev. Valerie Kingsbury officiating. Arrangements have been entrusted to Colchester Community Funeral Home, 512 Willow St., Truro, NS. Webcasting will begin at 1:58pm (AST) and is available along with full obituary and online condolences by visiting www.ColchesterCommunity.com