In Memory of
Estella Blanche
Gammon
1932 - 2022
Click above to light a memorial candle.
Memorial Candle Tribute From
Frontrunner Professional
"The lighting of a Memorial Candle allows visitors to leave a symbolic gesture of"
View full message >>>
Send Flowers
Menu 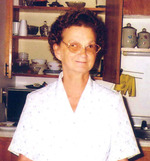 Gammon, Estella Blanche - Age 90, Debert. We are saddened to announce the passing of Estella Blanche Gammon on September 2, 2022, in Debert Court. Lovingly known as “Blanche” by family and friends, she was a daughter of the late Henry and Violet Gammon.

Blanche was known as a very caring and compassionate person. In her early years, she attended Halifax School for the Blind. This later led her to working for CNIB at both the Sydney City Hospital and Colchester Regional Hospital. Blanche took pleasure in reading and travelling. She visited the United States and many parts of the Maritimes with her dear friend, Joan. Blanche had also been a member of the Peoples Church for many years.

The family would like to thank the staff at Debert Court for their amazing care during Blanche’s time there. A special thank you to Linda Morash as well, for the years of friendship she gave Blanche.

Donations in Blanche’s memory may be made to the CNIB Foundation or Peoples Church.

A visitation will be held on Tuesday, September 6th from 1 p.m. until time of service at 2 p.m. in Colchester Community Funeral Home, 512 Willow St., Truro, with Pastor Ken Fillmore officiating. Burial will take place in Riverton Cemetery, Riverton, NS. Webcasting will begin at 1:58 p.m. (AST) and is available at www.ColchesterCommunity.com