In Memory of
Ruth Marcella
DeWolf  (Deon)
1930 - 2022
Click above to light a memorial candle.
Memorial Candle Tribute From
Frontrunner Professional
"The lighting of a Memorial Candle allows visitors to leave a symbolic gesture of"
View full message >>>
Send Flowers
Menu 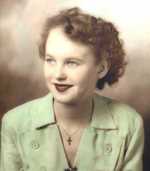 DeWolf, Ruth Marcella (Deon), age 92 of Debert, passed from our world peacefully on Sept. 13, 2022 while attended by friends and family. Her final mile was spent in the excellent care of the Shannex in Debert (thank you to the entire staff!), but few may know she began her journey in Searsport, ME, on a February day 1930, born daughter of the late Simon Remi Deon and his wife Marion Virginia (Cormier).

Ruth performed many different roles in life, including basketball player in school, telephone operator, sales clerk, foster parent, real estate agent, homemaker, antique picker, gardener extraordinaire, and a long stint as post mistress for MacQuarrie’s in Truro. Her proudest roles, however, were 61 years as wife to her loving late husband, Stephen Eugene DeWolf (aka “Santa” - so “Mrs. Santa” also became a role), as mother to her daughter Marcia (Zwicker) and son Eugene “Ted” and his wife Elizabeth (Ambrock), and of course as grandma to Jeremy & Katelyn Zwicker.

Ruth lost many of her siblings along the road, including sisters Rose-Marie, Dot, Lorraine, Eileen, Joan and Mildred, as well as brother Howard. Ruth will be missed by all the kids, her surviving sister Judith Robidoux (Massachusetts) and brother Simon Deon (New Brunswick), along with nieces and nephews too numerous to name here.

In lieu of flowers, please consider making a donation to the Debert Fire Brigade and/or the Alzheimer Society of NS.

Visitation will be held on October 1st at 1 pm followed by a Celebration of Life beginning at 2 pm, both in Colchester Community Funeral Home, 512 Willow St., Truro. After the service, a light reception will take place for those with a memory or story to share with family. Committal will be held the next day, October 2nd at 1pm in Middle Road Cemetery, Debert.