In Memory of
Michael Anthony
Burris
1970 - 2022
Click above to light a memorial candle.
Memorial Candle Tribute From
Frontrunner Professional
"The lighting of a Memorial Candle allows visitors to leave a symbolic gesture of"
View full message >>>
Send Flowers
Menu 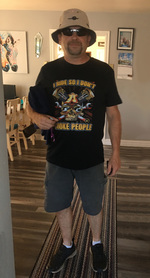 Burris, Michael Anthony – Age 52, Bible Hill, passed away on Tuesday, October 11, 2022, in the Colchester East Hants Health Center, Truro. Born in Truro, he was a son of Ross and Marie-a (Wood) Burris of Salmon River.

Mike drove transport trucks for almost twenty years – a much loved vocation. Later, he worked as a carpenter, building homes and garages, as he was able to build anything anyone wanted. He was a devoted Montreal Canadiens fan as well as a dedicated New England Patriots fan. He was even able to watch a Dallas Cowboys game while on a trip to Texas.

Mike had a love of chocolate, especially his mom’s chocolate cake and squares. He also was into most sports, playing broomball, baseball, hockey, ball hockey, and football to name a few. Mike enjoyed being on his four-wheeler, going out fishing and hunting anytime he could. During the summers, he could be found out on motorcycle tours with his buddies most weekends.

He was a wonderful life partner and Dad and an awesome granddad and stepdad. He will be sadly missed by family and friends.

Along with his parents, Mike is survived by his daughters, Brianna (Chris) of Great Village and Kennedy (Tom) of Debert; brother, Scott (Rachel) of Bridgewater; partner, Marjorie MacLeod of Bible Hill and her sons, Collin and Dalton; eight grandchildren, Aurura, Ben, Boyd, Mason, Keegan, Christopher, Hunter, and Lexi; nieces, Rylan and Hudsyn; along with many cousins, aunts and uncles.

He was predeceased by both sets of grandparents; uncle, Allan Burris; niece, Robin and grandson, “Baby” Bill; and aunt, Sarah.

Donations in Mike’s memory may be sent to Marjorie MacLeod, 15 Thompson Drive, Bible Hill, NS, B2N 5M4 or marjmacleod13@gmail.com, to help with the cost of funeral expenses.

The family would like to extend a special thank you to the Code Blue Staff of the Colchester East Hants Health Center, Truro for their many efforts and support on Mike’s behalf.

A time of visitation will be held on Friday, October 14th from 6-8pm in Colchester Community Funeral Home, 512 Willow St., Truro, NS. Cremation to follow. A Celebration of Life will be held at a later date at his home in Bible Hill.