In Memory of
Hazel Vivian
Kennedy
1926 - 2022
Click above to light a memorial candle.
Memorial Candle Tribute From
Frontrunner Professional
"The lighting of a Memorial Candle allows visitors to leave a symbolic gesture of"
View full message >>>
Send Flowers
Menu 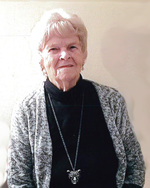 Born November 22, 1926, she was the last surviving child of the late Frank and Ella Kennedy of Middle Stewiacke.

Hazel was predeceased by her two sons, Gordon Roy Kennedy (Dianne) of Hilden and Arthur Roy Kennedy (Darlene) of Millbrook; her daughter, Beverly Kathleen Frizzel of Brookfield as well as her ex-husband and father of their children, Roy Davis Kennedy of Upper Stewiacke.

She was a caregiver to her own children and many foster children as well as several elderly people. She spent many hours quilting until her fingers were raw, but thoroughly enjoyed giving the quilts to family and friends. She loved plants and would grab a slip whenever and wherever she had an opportunity to do so. Her biggest weakness was the love of clothes. The more they sparkled, the better she liked them. Her greatest love was country music and dancing to the fiddle. Saturday night at Nine Mile River, you could always hear her say, “Crank it up!!”

She will be fondly remembered by family and friends and, as one niece described her, “a strong, active, hardworking, dancing, feisty lady who loved a laugh.”

A special thank you to the staff of Cedarstone for all of the care and kindness shown to Hazel.

There will be no service at this time. Interment will take place at a later date in Middle Stewiacke Cemetery.