In Memory of
Donald Andrew
Fisher
1940 - 2022
Click above to light a memorial candle.
Memorial Candle Tribute From
Frontrunner Professional
"The lighting of a Memorial Candle allows visitors to leave a symbolic gesture of"
View full message >>>
Send Flowers
Menu 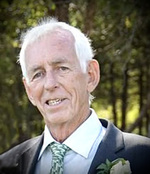 Fisher, Donald Andrew – Age 82, Hilden. It is with heavy hearts that we announce the passing of Don Fisher, age 82, after a short, but hard-fought battle with Acute Myeloid Leukemia. Don passed away peacefully at home, surrounded by his wife, and girls, on November 9th, 2022. Born on September 14th, 1940, in Halifax, to the late Lorna and Owen Fisher.

Don grew up in Middle Stewiacke, leaving school early, to work with his father, Owen, in carpentry. Following the death of his father, he took off out west on a new adventure, that eventually introduced him to the communication tower industry. Shortly after his move back to Nova Scotia, with only a red truck and a radio to his name, he started his own company, Don Fisher Construction Ltd. With the help of his wife, some faithful friends, and loyal employees, he built it up to the successful company that is still running today, 48 years later. He was a pioneer of the telecommunications industry in Atlantic Canada and is widely respected by his colleagues and peers that he worked with over the years. Don was a strong, intelligent, independent man, set in his ways, and the patriarch of our family. He worked hard, and there were no days off. We always joked that Dad's happy place was in an excavator, playing in the dirt, but we all knew it was the truth. His hard work helped him create a life he was proud of and providing for his family was always number one priority. Besides dedicating a life to his Company, he was deeply involved in the athletic community of Brookfield, spending many years on the rink board, playing hockey with the Cruise Missiles, and continued to play recreational hockey until the age of 78.

Although they came later in his life, he loved his grandchildren more than anything in this world. He and Owen shared many drives across the countryside, but he had a special bond with each and every one of them. Dad also enjoyed his acreage in South Branch, and spent time out there every day, until his health would no longer allow it. He was a huge animal lover, especially dogs and horses, and spent many years doing early morning barn chores, haying every summer, and paying lots of vet bills.

The family wishes to extend a thank you to Dr. Chris Cook, the nurses of MDU at CEHHC, as well as VON and Palliative Care. We would also like to thank John MacDougall, who was a good friend to Dad for many years, and a resource to us as we navigated through his illness. Dad looked forward to your many visits over the last few months.

Donations in Don’s memory may be made to South Colchester Minor Hockey Association (e-transfer to scminorhockey@gmail.com), SPCA, or charity of your choice. We also encourage everyone to donate blood if you are able to do so.

Visitations will take place on Tuesday, November 15th from 2-4pm and 6-8pm with a funeral service to be held on Wednesday, November 16th at 2pm, all in Colchester Community Funeral Home, 512 Willow St., Truro, NS., Rev. Larry Harrison officiating. Family flowers only. A private family burial will take place at a later date. Webcasting of the service will begin at 1:58pm (AST) and is available along with online condolences by visiting www.ColchesterCommunity.com