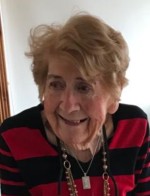 In Memory of
Isabel Marguerite
Stephens
1929 - 2022
Click above to light a memorial candle.
Memorial Candle Tribute From
Colchester Community Funeral Home
"We are honored to provide this Book of Memories to the family."
View full message >>>
Send Flowers
Menu

Stephens, Isabel Marguerite – Truro, passed away on November 17, 2022, in Colchester East Hants Health Centre, Truro. Isabel was born in Copper Lake, Antigonish County in 1929, a daughter of the late Arthur and Olive Sutherland.

Isabel is survived by her children, Stephanie (David), Donald Jr. (Wanda), and Robert; two grandchildren and three great grandchildren as well as nieces and nephews.

Besides her parents, she was predeceased by her husband, Donald Stephens who died in a plane crash in 1972 and her son, Tom who passed away in Beijing, China in 2017. Isabel was the last surviving member of her family of three brothers and a sister.

Isabel attended high school at Mount Saint Bernard in Antigonish. She moved to Ottawa with her sister in the 1940’s and worked at a law office while attending night school at Carleton University. She came to Truro to attend her sister’s wedding after which she secured employment as a bank teller at the Royal Bank. Isabel was crowned Miss Truro 1950 and married Donald the same year, moving on to raise their four children in Truro as well.

In lieu of flowers, the family would request donations to the VON in recognition of the incredible support they provided to not only their family, but to many families.

There will be no visitation or service by request. Arrangements have been entrusted to Colchester Community Funeral Home, 512 Willow St., Truro, NS. Online condolences may be sent to the family by visiting www.ColchesterCommunity.com