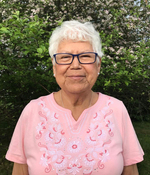 Dr. Mary Janet “Jane” (Young) ABRAM – Truro. It is with profound sadness that we announce the passing of our beloved matriarch, Jane Abram, age 80, of Millbrook First Nation. She made her way to the spirit world peacefully on November 18, 2022. Jane was a mother, aunt, grandmother, great-grandmother, and dear friend to many. A proud Mi’kmaq woman born in Antigonish, Nova Scotia on September 7, 1942, Jane was originally from Paqtnkek First Nation (Afton). She was the last surviving daughter of eleven children of the late Tuma and Sarah (Bernard) Young.

Jane entered the Indian Residential School in Shubenacadie, NS at the age of 5 and remained there up until the age of 13. After residential school, Jane attended high school in Antigonish and at the age of 20 she met and married her husband, Cyril Abram of Millbrook. Jane returned to school at the age of 40 to pursue education at Nova Scotia Teacher’s College and Mount Saint Vincent University, earning her Bachelor of Education Degree in 1987. Education was important to Jane and wanted to set a good example for her children. Over the years, Jane worked at many different schools. She was employed as a teacher’s aide at St, Mary’s School in Truro for 10 years, which she thoroughly enjoyed. She was a teacher at the Millbrook Adult Learning Centre, and she also worked at Dalhousie University as the Educational Counselor at the Aboriginal Counseling Unit. In May of 2018, Jane was admitted to the degree of Doctor of Humane Letters.

Spirituality played a significant role in Jane's life, such as traditional values and respect for mother earth and developing a connection to her Higher Power. As a tradition in her family, she would say the rosary every night, as an opportunity to get together through prayer. The seven sacred teachings of love, respect, courage, humility, honesty, wisdom, and truth were especially important traditional values that helped Jane and her family live a good life. Her advice to youth was to be proud of who they are and develop their spirituality to connect with their Higher Power when they need help to let go of what holds them back from moving forward.

Jane will be resting at home, 813 Willow St., Millbrook, beginning on Monday, November 21st at 11am until the time of Funeral Mass on Wednesday, November 23rd at 2pm with Father Jim O’Connor officiating in Millbrook Sacred Heart Church. Arrangements entrusted to Colchester Community Funeral Home, 512 Willow St., Truro. Online condolences may be sent to the family by visiting www.ColchesterCommunity.com