In Memory of
Leo Karl
Melchior
1934 - 2021
Click above to light a memorial candle.
Memorial Candle Tribute From
Colchester Community Funeral Home
"We are honored to provide this Book of Memories to the family."
View full message >>>
Send Flowers
Plant a Tree In Memory of Your Loved One
Click Here
Menu 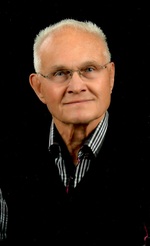 Melchior, Leo Karl – Age 86, Truro, passed away March 12, 2021 in Colchester East Hants Health Centre, Truro. Born on October 27, 1934, he was a son of the late Svend and Minna (Christophersen) Melchior.
Leo joined the Navy in 1951 and was a Chief Petty Officer (Sonar Operator), his last ship being HMCS Iroquois. His father and mother moved to Toronto and Leo’s mother said, “that as soon as Leo saw Lake Ontario, he knew what he wanted to do!” Following his last posting in Ottawa, he and his wife moved to Truro in 1983. He was a very strong man, both mentally and physically.

He is survived by his wife, Norma (Searle) whom he had 46 beautiful years with, having taken many cruises and trips to Europe, Russia, the Baltic, Bermuda, Australia, New Zealand and Fiji. They also spent six weeks each year in Fort Lauderdale-by-the-sea.

Leo was a volunteer with the Colchester Hospital Auxiliary in the Coffee Shoppe, he also enjoyed curling and was good at helping others, being a “jack of all trades.” Leo and Norma also owned a beautiful cottage at Five Houses, where they spent the whole summer. He really enjoyed working on all things there. His Dad often said his name was Leo “Work” Melchior.

Along with his loving wife, Norma, who says, “he was my boyfriend, my husband, my best friend and love of my life.” He also leaves behind six children, Anna, Montreal, QC., Donna (Trent MacEachern), Brampton, ON; Eric, Bridgewater, Tina, Ellershouse, Karl (Tracey), Dartmouth and Leo (Tania), Dartmouth; also surviving are five grandchildren and three great grandchildren; sister, Edie Cavin and brother, Roy.

Besides his parents, he was predeceased by sister, Marner Woltz and brother, Bobbie.

Cremation has taken place under the care and direction of Colchester Community Funeral Home, Truro. A Graveside Service will be held at a later date in Debert Cemetery (Plains Road), with Rev. Valerie Kingsbury, officiating. If so desired, donations in Leo’s memory may be made to the Canadian Cancer Society or Leukemia and Lymphoma Society of Canada. Online condolences may be sent to the family by visiting www.ColchesterCommunity.com