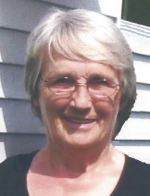 In Memory of
Audrey Madeline
Dean (McFadden)
1931 - 2021
Click above to light a memorial candle.
Memorial Candle Tribute From
Colchester Community Funeral Home
"We are honored to provide this Book of Memories to the family."
View full message >>>
Send Flowers
Plant a Tree In Memory of Your Loved One
Click Here
Menu 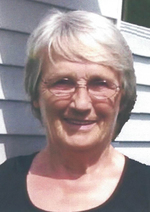 Dean, Audrey Madeline – Age 89, Truro, formerly of Stewiacke.
Auddie, Mum, Nana, Granna
Auddie arrived in the world in Lanesville on October 19, 1931 as the fourth child of Hazel (Hollett) and Parr McFadden. She had two sisters, Lila and Phyllis and one brother, Ron that day and over the next nine years she gained another two sisters, Carol and Effie and another two brothers, Al and Don. Needless to say, it was a household where there were a lot of chores. Rumour has it that Auddie, not all that fond of chores, would suddenly find herself needing to use the outhouse just as it was time to do the dishes, and strangely when she got back to the house, all the dishes were done. Hmmph. Go figure.
As Auddie got older she began school in Wittenberg. Being the mid-1930’s, she of course had to walk to and from school. She was adamant it was up hill both ways. Later, she trouped off to Halifax to attend the School for the Blind with her older sister, Phyllis. Auddie wasn’t totally blind, as was evidenced by her superpower level ability to see around corners. Just ask her kids.
After finishing school, Auddie worked a few jobs including as a wanna-be Willy Wonka at the Moir’s Chocolate Factory in Dartmouth and as a switchboard operator in Stewiacke (probably the inspiration for that Lily Tomlin character on Laugh-In). In her early 20’s, Auddie met and married Laurie Dean. They settled in Stewiacke, living for a few years with their friends, Donnie and Marie Gourley. It was during those years Auddie also became Mum. First two sons and two daughters each about two years apart, then a break of seven years and another son. During these years, Auddie was mostly a stay-at-home Mum and I’m sure those five kids kept her as busy as two full time jobs. Later, as the kids got older, she took a part time job at Ellis’ Convenience store and took up knitting with the group at Colchester Cottage Craft.
In her late 40’s, Auddie lost her husband to a stroke, leaving her to support her younger children on her own. She took additional jobs at the Wildlife Park, delivering newspapers at the ass-crack of dawn and in security at the Halifax Airport. It was at that job she brags she frisked country music singer, Randy Travis.
At 61, Auddie became Nana for the first time. It was the role that gave her the most joy. You could tell by the way her face lit up when any of them were around. Her grandchildren, nine in all, loved to listen to her tell wild stories, teased her relentlessly and cringed at some of the things that came out of her mouth. In particular, her classic parrot telephone greeting of ‘Hello’ still cracks them up to this day. And seriously, if you close your eyes and imagine a parrot saying hello on the other end of a phone … that was their Nana. Don’t worry, Nana got her own back against the little buggers. She was never short of a witty or lovingly vicious comeback, telling them where to go, how to get there and what they could do while they were there. And who else would tell them it was going to be a cold winter so they should take her up on the offer to knit them a peter-heater.
Nana finally became Granna, (that’s great grandmother to some) when she was 86. In all, she was Granna to three tiny humans.
Auddie was a strong and determined woman. We use the word determined to be polite because some think stubborn isn’t a compliment. Don’t tell that to her five kids, nine grandkids or three great grandkids though, because they just might have inherited a touch of that particular trait.
Daughter, sister, mother, grandmother, great grandmother, friend, coffee drinker (without the peas thank you very much, Danny), knitter, dancer, golfer, spiced rum fan, reader and story teller. She loved, she laughed, she cried, she cussed. Her stories were long and never truly made sense even before the dementia set in. She was loved.
Auddie passed away in Cedarstone Enhanced Care early in the morning on April 9th, 2021 at the age of 89 (apparently, she was in a hurry so she could beat Prince Philip to the gates). After a lengthy battle with dementia and all its complications, she is finally at peace.
She is survived by her children, Derek (Joan), Dan (Kathy), Tammi (Grant Sill), Julia and Brad (Kim); grandchildren, Holly, Jill and Mark Dean, Bob and Zach Sill, Chelsea and Lindsay Autor and Ceilidh and Abby Dean; great grandchildren, Maddie Sill and Harper and Lachlan Sill; her sisters, Lila Cloney and Effie Harrison and her brother, Albert McFadden.
Auddie’s family would like to thank the staff at Townsview Estates for the four months of trying to contain the feisty, little woman they cared for and all those in Eden Hall at Cedarstone for the more than four years of taking care of and putting up with their Mum, Nana and Granna. She was a handful. Thank you.
Following cremation, a private family service will be held when some of the far-flung family is able to travel home.
Memorial donations may be made to the Alzheimer Society or C.N.I.B.
Arrangements have been entrusted to Colchester Community Funeral Home, 512 Willow St., Truro, NS. Online condolences may be sent to the family by visiting www.ColchesterCommunity.com