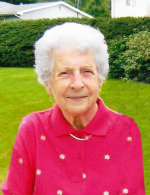 In Memory of
Margaret Florence
MacLaren
1925 - 2021
Click above to light a memorial candle.
Memorial Candle Tribute From
Colchester Community Funeral Home
"We are honored to provide this Book of Memories to the family."
View full message >>>
Send Flowers
Plant a Tree In Memory of Your Loved One
Click Here
Menu 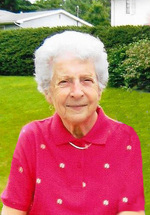 The family of Margaret Florence (MacKay) MacLaren is sad to announce her passing at her home on April 17, just 15 days short of her 96th birthday.

Margaret was born on May 2, 1925 to Florence and Daniel MacKay on the family farm in Lower Onslow. She attended Success Business College in Truro. From 1942-46, she worked in the Debert office of the Royal Canadian Ordinance Corps, and later in the office of Borden’s Milk, Truro.

She married the late Bert MacLaren, raised a family of three children, and, together with Bert, operated the office of their family - owned trucking business (MacLaren’s Transfer) until 1966 when the business was sold. Following this, she managed the Truro office of Day & Ross Transfer while Bert became the Truro Terminal Manager. She was an accomplished seamstress, sewing draperies and various clothing items on request and for family. We enjoyed her fabulous cooking and baking and were never without pies, cakes, cookies and squares. She enjoyed knitting, ceramics, and gardening. She took great pride in decorating and maintaining our home. Most of all, she was a quiet, loving, caring wife, mother, grandmother, and great-grandmother who was very proud of her family. She always put the needs of her family ahead of her own and until the end was offering to get you a blanket or cup of tea or whatever she thought you might need. She loved a cup of tea and the teapot was always ready for anyone who dropped in. Although a quiet individual she often surprised us with her unexpected dry wit.

Her family extends a very special thanks to private caregivers Diane Lundie, Vivian Dunphy, and Julia Prest who have lovingly cared for her at home. A special thank you to neighbors and friends, Joan and Vic Yeadon and Nora and John Murdock for their visits and support to Mum. Margaret’s wishes were to remain at home to the end of her life; to this end, we are very grateful for the support of Dr. Wanda Brown; Shelley Vincent; John Gatto, Seniors Health; Darlene Kent; Valerie Williams; Ruth Morrison; as well as VON Home Support, VON Nursing; and the Palliative Care Team of Dr. Cortney Smith and Lisa Weatherbee.

(By invitation only)
A private visitation will be held Tuesday, April 20th from 2 - 3 p.m., followed by a private family service at 3 p.m. both in Colchester Community Funeral Home, Truro with Rev. Phillip Kennedy officiating. Interment at a later date in Watson Cemetery. Please join the family for the service via Live Webcasting on the above date and time on the funeral home webpage. Online Condolences/Webcasting is available at: www.ColchesterCommunity.com