In Memory of
Gordon Homer
Slack
1932 - 2021
Click above to light a memorial candle.
Memorial Candle Tribute From
Colchester Community Funeral Home
"We are honored to provide this Book of Memories to the family."
View full message >>>
Send Flowers
Plant a Tree In Memory of Your Loved One
Click Here
Menu 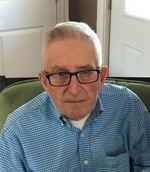 Slack, Gordon Homer – Age 89, Debert. It is with deep sadness that we announce the passing of Gordon Slack on April 25, 2021 after living with the challenges of Alzheimer’s disease.
Gordon was born to the late Harold and Bessie Slack on February 18, 1932. He grew up in East Mines where he received his education in a one room schoolhouse. Soon after leaving school, he and his brother along with two of their buddies headed to Ontario to seek their fame and fortune. After four years in London, ON, he had enough and decided it was time to come back home and start farming. He began raising chickens, but then found that cattle and blueberry farming was his passion. Soon after arriving home, he met his wife-to-be, Joan, and the rest as they say, is history. Gordon enjoyed spending time with his family and friends, telling stories and making people laugh. If he was not at home, you would most likely find him in a blueberry field or on a tractor.
Gordon is survived and missed by his loving wife of 52 years, Joan; sons, Gary Black, Joe Slack (Toby); daughters, Susan Legge and Josephine Babineau (Gerald); grandchildren, Patrick, Levi, Mackie, Zoe, Jenna Olivia, Alec, Yan and Melodie; step grandchildren, Devon and David; sixteen great grandchildren along with several nieces and nephews.
Besides his parents, he was predeceased by his brother, Leaman and his sister, Carole.
We would like to extend a special thank you to the staff of Debert Court for the kindness and compassion shown to Gordon while he was in their care.
Donations in Gordon’s memory may be made to the Alzheimer Society of Canada.
A private family viewing will be held with interment in Middle Road Cemetery at a later date. Arrangements have been entrusted to Colchester Community Funeral Home, 512 Willow St., Truro, NS. Online condolences may be sent to the family by visiting www.ColchesterCommunity.com