In Memory of
Corey John
Beaver
1993 - 2021
Click above to light a memorial candle.
Memorial Candle Tribute From
Colchester Community Funeral Home
"We are honored to provide this Book of Memories to the family."
View full message >>>
Send Flowers
Plant a Tree In Memory of Your Loved One
Click Here
Menu 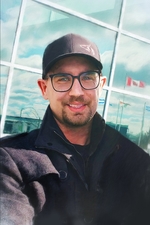 Beaver, Corey John – Age 27, Sundre, AB formerly of Truro. With broken hearts we announce the passing of Corey John Beaver on Saturday, May 1, 2021 in Sundre, Alberta.

Corey was born on September 9, 1993 in Truro, NS. He was the son of Kevin and JoAnn Beaver; brother to Megan Beaver (Robert) and uncle to Landon, Bennett and Ethan.

Corey was predeceased by his grandfather, Eric Beaver and grandmother, Yvonne Freitag.

Corey attended Holland College and received his diploma in Golf Club Management. During this time, he was a proud member of the Atlantic Collegiate Athletic Association playing for the Holland Hurricanes Golf Team. Corey continued his education and became a member of the PGA.

During his summer months at Holland College, Corey worked in Jasper, Alberta to enhance his knowledge of the sport and the business of golf. His career continued in Ontario where he spent one year working. His passion and dedication for the game then led him to Sundre, Alberta in 2017. It is here where Corey worked to complete his PGA courses and become a Class A Pro in 2020.

While growing up, Corey enjoyed playing for Truro Minor Hockey, snowboarding, paintball and spending time with friends and family. Moving out West provided Corey opportunities which led him to become an avid outdoorsman. He loved hiking, hunting, fishing and riding his dirt bike.

Corey developed many close relationships during his life and following his golfing career and Sundre became his second home.

He will be deeply mourned by many, including his partner, Brooke Kiatipis; grandfather, James Freitag; grandmother, Beverly Beaver as well as many aunts, uncles and friends.

Due to COVID-19 restrictions, a time of celebration to honour Corey’s life will be held at a later date. Arrangements have been entrusted to the Colchester Community Funeral Home, 512 Willow St, Truro, N.S.

Donations in Corey’s memory may be made to Mastocytosis Canada. Online condolences may be sent to the family by visiting www.ColchesterCommunity.com

When someone you loves becomes a memory,
that memory becomes a treasure.
Rest In Peace.