In Memory of
C. "Donald"
O'Connor
1927 - 2020
Click above to light a memorial candle.
Memorial Candle Tribute From
Colchester Community Funeral Home
"We are honored to provide this Book of Memories to the family."
View full message >>>
Send Flowers
Plant a Tree In Memory of Your Loved One
Click Here
Menu 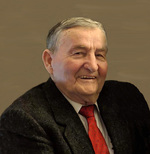 It is with the heaviest of hearts that we announce the passing of our beloved husband, father and grandpa. Dad passed away in the early evening of Saturday, October 24th, 2020 with his daughters holding his hands. Although his illness was brief, we gratefully had the time to remind Dad of how deeply loved he was and to share our gratitude for all that he has meant to us. His wife, Mary was not well enough to be with him in his final hours, but was with him in spirit. Dad’s last breath came immediately after hearing a message from Mom that said, “I love you.”

Dad was born in Belledune, New Brunswick on August 6, 1927. He was the son of the late Daniel and Sara (Doucet) O’Connor. At the age of ten, Dad moved with his family to Sydney Mines. At sixteen, he left school to work with the British Canadian Co-op Store. Two years later, he went to work for the Canadian National Railway (CNR) and remained with the railroad for almost 38 years. It was while working for CNR that he met his wife of 62 years, Mary Jane Lamey. Together they built a life in Truro where they remained, in their home, until his death.

It bothered Dad that he left school before completing his secondary education. As an adult, with Mom’s encouragement and support, he enrolled at Coxheath High School to complete Grade Nine. When his school day was finished, Dad started the night shift for CNR, completing homework during his breaks. Dad then attended night school to finish grades ten to twelve. He wrote his provincial exams, graduated and quickly became a volunteer tutor for adults wanting to learn to read and write.

Never one to be still for long, Dad bought a corner store. For fifteen years, he and Mom ran King Street Convenience while working full-time jobs and raising a family. Dad was an extrovert who loved talking to people and finding ways to give back, including freely giving food from the store to those who “needed a little help.” A man of deep faith, Dad believed in quiet acts of kindness. He encouraged his daughters to act, to speak up, to find ways to bring goodness and light into the world and to live with meaning. These were not just the words he spoke - they are the examples that he set.

Dad is survived by his wife, Mary (Lamey) O’Connor and their two daughters, Colleen (Camile Hepter), Truro and Clare (Meredith Campbell), Halifax. He will be profoundly missed by his beloved granddaughter, Olivia, whom he loved and cherished beyond measure. Also left to mourn is the son he never had, but whom he thanked God for gracing him with, Mike Murphy (Charlottetown, PEI). Dad is also survived by his sister, Inez Madinsky, Port Coquitlam, BC; brothers, Emmett (Mae), Sydney Mines; Dan, Ottawa, ON; John, Florence, NS and several nieces and nephews. Besides his parents, he was predeceased by sisters, Mary, Nora, Mona, Margaret and Marie; brothers, Cosmos, Frank and Edmund. Dad will also be sadly missed by Goldie Bernardi and Darlene Fisher, who have become part of our family.

Gratitude and appreciation are extended to Drs. Tanya Munroe, Courtney Smith, and Dave Henderson. A special thanks also goes to Care Coordinator, Sheryl Stevens, Palliative Care Consult Nurse, Lisa Weatherby and to the countless VON nurses and homecare workers who have become cherished members of our family.

A funeral mass will be held at 11:00 a.m. on Friday, October 30th in Immaculate Conception Church, 669 Prince Street, Truro with interment to follow in Robie Street Cemetery. Due to COVID-19 restrictions, a maximum of 80 people are permitted to attend (including family – your understanding is appreciated). Please enter via Campbell Hall (Back Parking Lot) to register and fill out COVID-19 Screening Form. In lieu of flowers, donations may be made to Colchester East Hants Hospice Society, the Society of Saint Vincent de Paul or the Colchester SPCA. Arrangements have been entrusted to Colchester Community Funeral Home, Truro. Online condolences at www.ColchesterCommunity.com

*For those unable to be present at the funeral Mass due to Covid-19 concerns, you may join us for the interment which will take place in Robie Street Cemetery on Friday, Oct. 30th at approx. 12 noon.