In Memory of
Campbell
Gunn
Click above to light a memorial candle.
Memorial Candle Tribute From
Frontrunner Professional
"The lighting of a Memorial Candle allows visitors to leave a symbolic gesture of"
View full message >>>
Send Flowers
Menu 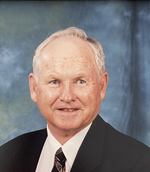 Gunn, Thomas “Campbell”- With heavy hearts, we announce the passing of Campbell, who passed away peacefully on January 16, 2022, age 85, in Cedarstone Enhanced Care, Truro.

He was born on December 10, 1936 in Plainfield, Pictou County. He was the son of the late Thomas George William Gunn and Christina “Nettie” Jennetta (Campbell) Gunn. He was predeceased by his two sisters and one brother in infancy. Campbell is survived by Ann, his loving wife of 58 years. He will be missed by his son, Andrew Gunn; daughter, Heather (Jeff) MacCallum; sister, Doris Cassidy; granddaughters, Emily and Sarah MacCallum and his nieces and nephews.

Campbell had a passion for life and found joy in his continuous commitment to volunteering and being a member of the St. Andrews United Church in Truro and life Elder of Session. He was dedicated to the Scout movement being Club Master for 15 years and Treasurer of the Colchester Area Scouts for several years. He received the Medal of Merit from Scouts Canada, a Scouting Award from the United Church of Canada and a recognition of 45 years of Service to Scouting.

He and Ann always loved camping, which they enjoyed sharing with their children throughout the summers. In 1984, he and Ann joined the Hub Campers group and the National Association (Family Camper’s and R’V’s). They spent many weeks and weekends creating fond memories with their dear friends. In 2005, they also joined the Good Sam Club where they continued their camping adventures. His interests also included bowling, lane swimming, skating and catching up with friends over coffee.

Campbell was always the one you could count on for support and a big smile. Campbell led with his heart in everything he did and will be remembered for his loving hugs, kindness and willingness to lend a hand to any neighbour, friend or person in need.

His family has always been his pride and joy. Campbell will always be remembered as a caring husband, father, grandfather, brother and uncle. He will be deeply missed by all who had the pleasure of knowing him.

His family would like to extend a sincere thank you to Cedarstone, Parkland and Today’s Nurse for their continued care and support.

A Celebration of Life will be held on Saturday, June 4th at 11am in St. Andrews United Church with Rev. Shannon MacLean officiating. Masks are mandatory. Reception to follow. Interment will take place in Bible Hill Cemetery following the reception. Webcasting will begin at 10:58am (AST) and is available at www.ColchesterCommunity.com

Scouts Canada
The insignias listed here may be subject to copyright and / or trademarked. Those copyrights and trademarks are owned by the respective organizations.
Printable
Share on Facebook