In Memory of
Rev. Roger Kenneth
Moore
1944 - 2021
Click above to light a memorial candle.
Memorial Candle Tribute From
Colchester Community Funeral Home
"We are honored to provide this Book of Memories to the family."
View full message >>>
Send Flowers
Plant a Tree In Memory of Your Loved One
Click Here
Menu 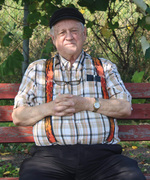 Moore, Rev. Roger Kenneth – 76, Hilden, died peacefully on February 17, 2021 at home in his 76th year. Born in May of 1944, he was the only son of the late Charles and Lucilla (Gill) Moore of Trenton, NS, where he grew up feeling loved and thoroughly enjoying his childhood.

Called to the Christian Ministry, Roger studied at Bethany Bible College in Sussex, NB then on to Nazarene University in Colorado Springs and lastly receiving his Master of Divinity Degree from the Atlantic School of Theology in Halifax. He was ordained to the Ministry in 1969, pastored churches in Markdale and Cambridge, ON, Saint John, NB, Moser River, Bass River – Economy and Five Islands, Margaretsville and Springhill, St. Peter’s, Port Hood and Inverness, Cape Breton.

Roger was always interested in Biblical Scholarship. He served the United Church of Canada on Education and Student Committees and the Conference Interview Board for many years. He belonged to the Biblical Archaeology Society and the Society of Biblical Literature. Upon his retirement in 2010, he was appointed as Minister of Faith Formation for First United Church in Truro. In this position, he conducted a well-attended critical Bible Study Group as well as a film appreciation group for many years.

Some folks in many communities will remember him best as a magician who loved to perform for children. Others will recall that he was a model maker who built beautiful dollhouses and model ships, some of which still are displayed in various museums in the Maritimes.

Roger was predeceased by his wife, Moira Grace Kay in 2016. He is survived and will be missed by daughters, Tanya (Fran) and Elizabeth (Donnie) of Saint John, NB; grandchildren, Paul (Jamie), Kiersten (Nigel), Codie, Emma, Tiana, Steven, Tyler, Mya, Nicholas and Alexander and great grandchildren, Juliette, Violet, Samuel and Tyanna. In his senior years, he enjoyed a special relationship with his dear friend and travelling companion, Anne Brown.

Respecting his wishes, Cremation has taken place. There will be no visitation. First United Church in Truro will acknowledge his Ministry during a regular worship service. Arrangements have been entrusted to Colchester Community Funeral Home, 512 Willow St., Truro, NS. Online condolences may be sent to the family by visiting www.ColchesterCommunity.com