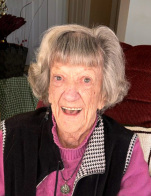 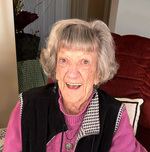 Kane, Elsie “Elma” Margaret – Age 91, passed away on October 25, 2022, in Colchester East Hants Health Centre, Truro. Born in Springburn, Glasgow on September 29, 1931, she was the eldest child of the late Elsie Barclay and William Wilson. Elma was brought up in Falkirk, Scotland with her brothers, James and Jackie, and sister, Cathie.

Elma met her husband, John F. Kane, while ballroom dancing in 1948. They were engaged in 1949 and married on June 28, 1950. They immigrated to Oakville, Ontario in 1954. Elma worked at General Electric from 1955 until 1960. In 1967, Elma and John were blessed with their daughter, Maureen Theresa. Two years later, their son, John William arrived to complete their happy family.

The Kane family lived in Burlington, Ontario until their arrival in Truro on November 19, 1972. Elma loved every minute of her life in Truro. She loved its beautiful Parish and great people.

Besides her parents, Elma was predeceased by her husband, John F. Kane; brothers, Jim and Jackie Wilson and sister, Cathie.

Donations in Elma’s memory may be made to St. Vincent De Paul, CWL, Knights of Columbus, or Kane’s Kitchen.

Arrangements have been entrusted to Colchester Community Funeral Home, 512 Willow St., Truro, where a visitation will be held on November 1st from 6-8pm. A Funeral Mass will take place on November 2nd at 2 pm in Immaculate Conception Church, 669 Prince St., Truro with Fr. Andrew Rembarczyk officiating. Reception to follow. Interment in Robie Street Cemetery, Truro, NS.

PLEASE NOTE TIME CHANGE FOR SERVICE FROM 11am TO 2pm.